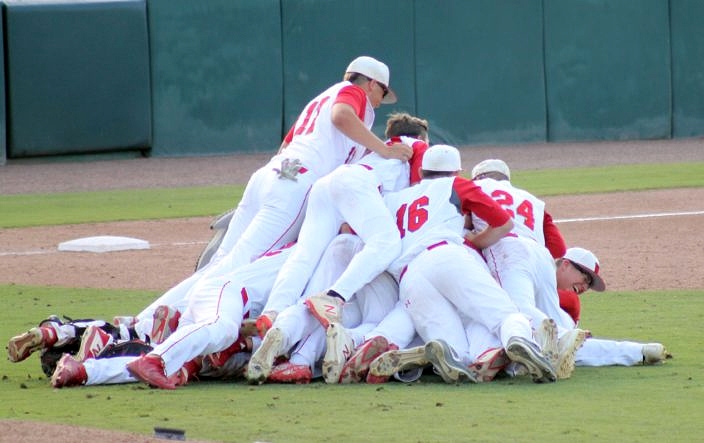 The Red Devils dogpile in celebration after closing out the championship victory.

It came as little surprise how competitive Thursday’s 1A title game was, with two Levy County rivals in Chiefland and Williston facing off for the state championship. The showdown provided an exciting and close contest right down to the wire, as the Red Devils held on for a 4-2 victory that gives Williston it’s fourth state crown in program history. The game was also Chiefland manager Kyle Parnell’s last, as the veteran skipper is now set to retire.

“It was really ebb and flow,” Williston manager Jim Smith said. “We got up by two and they didn’t quit and tied it back up to two. We got ahead 3-2 and then got a clutch run late. Their starter, Keegan McLelland, was hurt and it was a really gutsy effort for them, but on the other side I thought our kids made plays. We were aggressive and our short game was really good today and put pressure on them. We played well defensively, pitched well and we scratched and clawed like we have been.”

The Red Devils won back-to-back titles in 2014 and 2015, and also won the championship all the way back in 1923. Adding another trophy to the program is something the team will never forget.

“It’s so special in a small town where we come from,” senior captain Grayson Geiger said. “We know everybody, and the fourth title from this one small town is a great feat. I’m just glad that we got to do it. We’re brothers and we’re really tight and it was really great.”

The Red Devils plated the winning run on a suicide-squeeze from Jacob Elder in the top of the fifth. Dalton Vanderstrasse dropped down a bunt and reached on an error, Geiger moved him to third with another sac bunt and then Elder got the bunt down softly to the pitcher while Vanderstrasse timed it perfectly to leave the defense with no chance at making the play to stop him and having to settle for the out at first base.

“That was my first bunt of the season,” Elder admitted. “I told Coach that I could bunt this if I needed to, and in the middle of the at bat I looked at him and he gave me the sign and I knew I had to do a job. I got it, ran to first and knew that run was in and I got my boys hyped.” 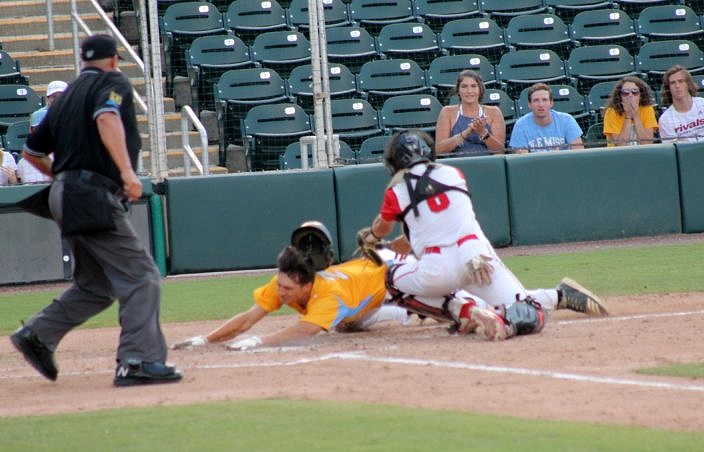 The Red Devils come up with a big out at the plate in the third inning.

Williston broke open with a 2-0 lead in the top of the first, but Chiefland also responded with a huge play to limit the damage. Connor Neal walked and Logan Head dropped down a sacrifice bunt and reached on an error. Cade Wellborn then drew a walk that loaded the bases, and Ethan Davis also worked a free pass for an RBI walk. Ryan Braddock then put a charge in the ball to left field, delivering a sac-fly RBI as Head tagged up from third and scored.

Chiefland managed to halt things right there with a rare feat. The relay throw was cut off and the runner heading to third was gunned down, and the Indians then alertly had starting pitcher Keegan McLelland check first base and recorded a triple play when it was ruled the runner had left early.

“That was pretty cool,” McLelland said of the rare feat in turning the triple play. “It was actually my second baseman who told me to throw it to first, because I had no idea. So we threw it to first and we just ended up getting lucky and getting a triple play.”

With the momentum on their side, Chiefland struck back in the third to even things up again. Catcher Elijah Smith turned on an inside pitch and lined it deep into the left field corner for a stand-up double, and then gave way to courtesy runner Connor Whistler. Kelby Osteen sent a base hit through the left side for runners on the corners, and Aiden Horne singled to shortstop to send Whistler to cross the plate and put the Indians on the scoreboard.

Chiefland kept plugging away to scratch another run across. Payne Parnell sent a base hit to right that filled the bases back up, and McLelland evened the score with an RBI single. 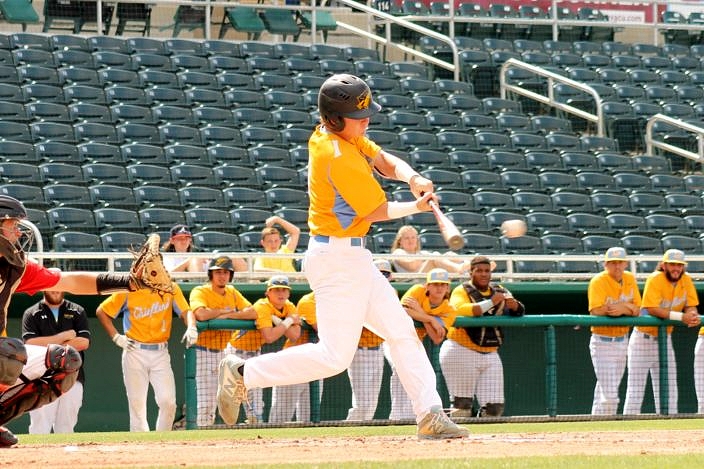 Payne Parnell connects for the first of two hits on the day, as he went 2-for-3 for Chiefland.

This time it was Williston that responded defensively to halt the threat. The Red Devils gunned down the runner attempting to score from second base on McLelland’s hit, and then another runner was caught stealing.

Down by a run in the bottom of the sixth, McLelland connected for a shot that sailed deep to right field and looked sure to jump-start a rally, but outfielder Ethan Davis sprinted hard and managed to haul in the ball with a nifty basket catch.

“I’m not going to lie, off the bat I thought it was a home run and it looked like we were going to go into some extra innings,” Davis said. “But the wind got ahold of it and I just turned around and got open like we’ve been working on and it was there.”

Williston tacked on one final run in the seventh, as Coach Smith aggressively gambled with his last three outs to successful provide some extra breathing room. After the lead-off batter walked but was then caught stealing, the Red Devils again gave the steal sign after Elder connected for a base hit. Elder successfully swiped the base and then came home when Mikey Rey reached base on an error.

The first two batters were retired in order in the seventh, but Elijah Smith came through again by lining a base hit to left to keep the slim hopes alive. He was 2-for-3 on the day, and turned on an inside pitch for great contact all three at bats. 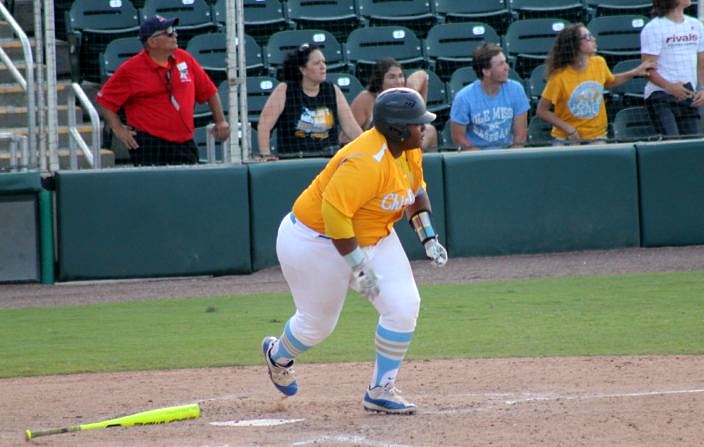 Elijah Smith races to first base after singling with two outs in the seventh, as he was 2-for-3 with a double on the day.

“I realized they were not going to beat me with the curveball so I was just sitting on the fastball and waiting for my pitch,” Elijah said. “It was surprising that they pitched inside to me, so I was just trying to make them pay when they did.”

A fielder’s choice ground out tallied the final out and sparked the Red Devils’ championship celebration. Even while enjoying the moment with his team, Coach Smith could not help and reflect on the fact that it was the last time he will face Coach Parnell.

“It’s bittersweet to me because Coach Parnell and I are such good friends, and it’s his last game he will coach ever,” Coach Smith said. “So I am happy for him in his retirement and sad a little bit. I am really happy for us though. But he’s a class act.”

Coach Parnell spoke afterwards of the pride he felt to coach the Chiefland Indians right down to this, his final game at the helm. The way his players worked all season and gave everything they could is all he could ever ask for, and even in his parting words he preferred only to acknowledge those players.

“It’s been an up-and-down season but we kept believing,” Parnell said. “We’ve got three guys and possibly a fourth guy in the starting lineup that are probably going to need surgery after the season, and they manned up and played through some injuries. There certainly were some times when they could have gave upon the season, but they never did, They kept fighting and coming to practice everyday to get to this game.” 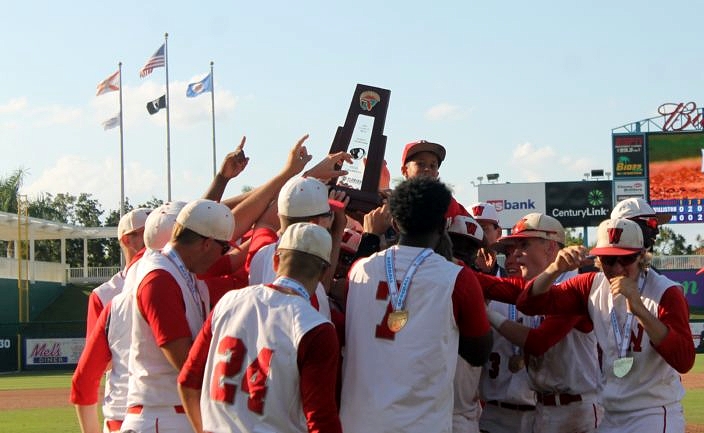 The Red Devils celebrate with the state trophy.