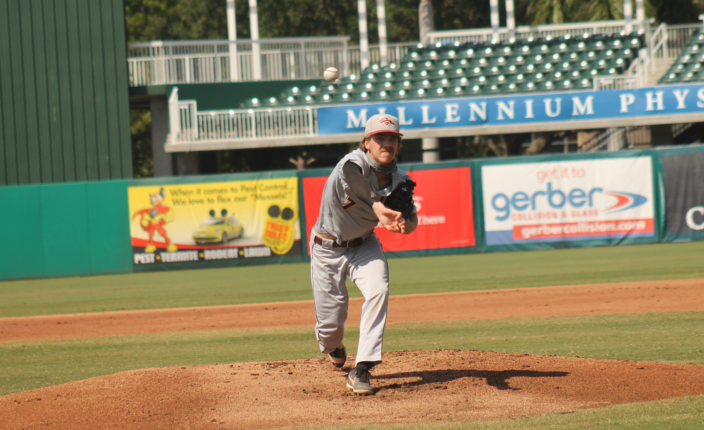 Wyatt Campbell allowed one hit and four walks, while striking out eight to lead the Colts to victory.

For the first time in program history, the North Marion Colts will play for a state championship. Monday afternoon the Colts earned their first victory ever at the FHSAA state tournament, with a 4-1 win over the Nature Coast Sharks in a Class 4A state semifinal at Hammond Stadium in Fort Myers.

“The guys have just done a fantastic job of playing clean baseball once the playoffs began,” North Marion Manager Dale Hall said. “This is a tremendous feeling, it really is. You don’t try to gauge your season based on whether you make the playoffs, or make a run and go to the Final Four in the playoffs. But for us to be in this position, it feels fantastic. But what really makes me feel good is the joy these guys have being in this situation.”

The Colts (21-8) will face the North Broward Prep Eagles in Tuesday’s 4A state championship at 7:00 PM, also at Hammond Stadium. The Eagles (19-10-1) reached the title game with a 7-6, extra-inning win over the Dunedin Falcons in the other semifinal on Monday. 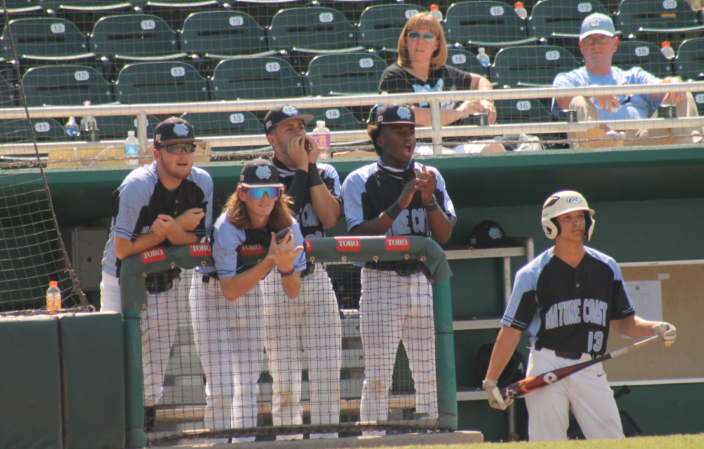 The Sharks last made the state Final Four in the 2018 season, and five members of the team were also on that 2018 roster.

Wyatt Campbell led the way on the mound to earn the victory. The senior right-hander limited the Sharks (24-5) to one hit and four walks, and he also hit the last batter he faced before being forced to exit due to reaching his pitch-count limit. Campbell struck out eight, finishing the season with 112 total strikeouts in just under 75 total innings.

“I was just trying to execute for my catcher and give him the best chance to give me a strike,” Campbell said. “I just tried to stick to the game plan the whole game. I felt really good coming in and the fastball felt good. I honestly didn’t really have my curveball warming up. Thankfully, I found it during the game, because it really helped me out to get those strikeouts.”

Nature Coast led early on, after scoring with its first swings in the bottom of the first inning. Zeth Rodriguez walked, advanced to second on an unassisted ground out to first base, and then beat the throw to third on a 6-5 fielder’s choice off the bat of starting pitcher Justin Montanez that put runners on the corners. Brian Erb followed with a fielder’s choice RBI, as the runner was erased at second but the fielder lost the ball on the exchange while attempting to make the throw to first attempting for a double play that would have ended the inning. 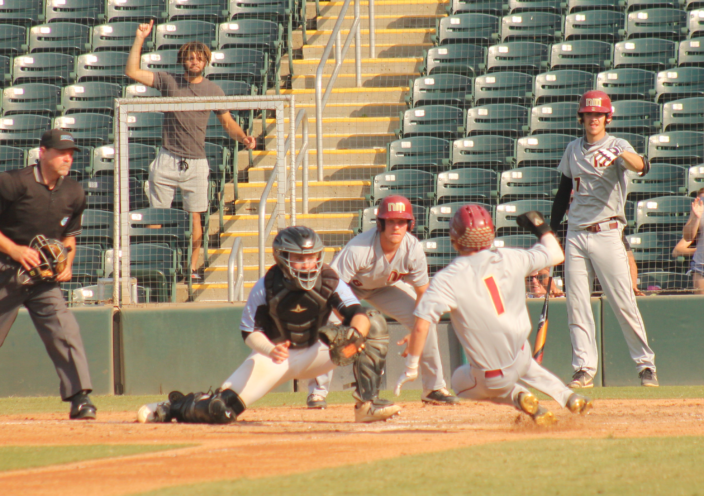 The Sharks catch the trailing base runner at the plate after an RBI single from the Colts’ Jacob Walton in the top of the sixth inning. Gavin Miller scored ahead of the throw to get one run on the hit.

The Colts answered back to tie things up in the third. Catcher Nate Fennwald singled to right and then was replaced on the bases by courtesy-runner Karson Smith. Smith moved to second on a passed ball, to third on a balk and then scored on a passed ball.

North Marion grabbed the lead an inning later. With two outs, Jacob Walton delivered a base hit into shallow center field, then stole second and came in on the strength of an RBI single through the left side by Campbell.

“Momentum is big in baseball, and I feel like ever since the playoffs started we’ve had that ‘it’ factor about us and we’re always in ‘go mode’,” Walton said. “It’s win or go home and playing with momentum can win you a lot of baseball games.”

Walton came through again two innings later, with an RBI single to left field with the bases loaded. Gavin Miller walked, Elias Garcia singled and Deric Fabian also walked to fill the bags. Walton then stung the first pitch he saw to left field to drive in Miller, although Garcia was caught at the plate also attempting to score on the play.

An inning later the Colts loaded up the bases once more, as Connor Burks was hit by a pitch, Donny Salguero lined a single to left and Garcia walked to bring up Fabian. The power hitter put a charge into the ball for a shot that may have gone for his 14th home run of the year in most high school ball parks, but was still plenty deep enough to allow Burks to tag up and score on the sac-fly RBI. 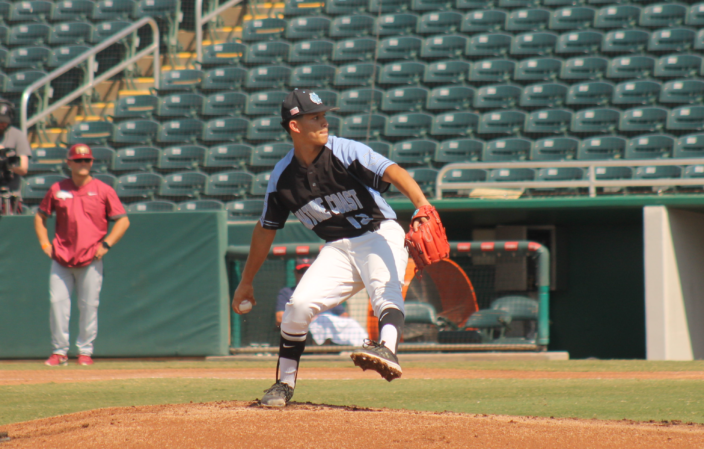 Justin Montanez went the distance for Nature Coast to take the loss, allowing four earned runs on seven hits and two walks, while striking out five.

“This park is huge, but you don’t ever change your approach,” Fabian said. “Obviously home runs come when they come. You just stick to the approach. I was more happy with myself that I got the job done. It’s a deep part of the field, so I just hit it as hard as I could.”

Campbell managed to retire the first two batters in the seventh to nearly go the distance. But after Corwin Wilkes was hit by a pitch in a seven-pitch at bat, Campbell was forced to exit after having thrown 108 total pitches.

“To have to pull him in that situation is very difficult, but it makes it easier that we had to do it,” Hall said. “But just for him to get us in that position, I couldn’t have been more proud of him.”

Karson Smith came on in relief, and he earned the save when the catcher, Fennwald, ran under a foul pop to make a running basket catch for the final out of the game.

Nature Coast avoided being no-hit thanks to an infield single from Anthony Anselmo in the bottom of the fifth inning. Anselmo legged out the base hit on a roller into the grass in front of second base, beating the wild throw to first after the defender bare-handed the ball and threw across his body attempting to salvage the play and still get the ball to the first baseman in time. 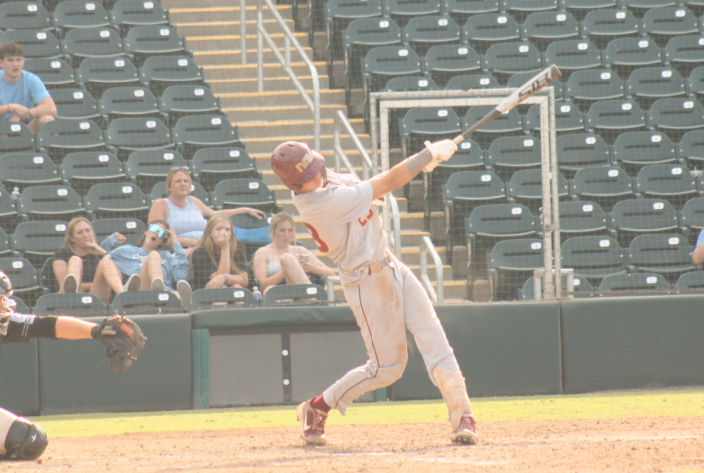 Deric Fabian puts a charge in the ball deep to center field for a sac-fly RBI in the seventh.

Anselmo is one of five seniors who were a part of the Sharks’ last trip to the state Final Four back in the 2018 season, along with Collin Nelson, Zeth Rodriguez, Erb and Montanez. In their four years together they have learned a lot of baseball. That 2018 state semifinal loss was a valiant battle in a tight, competitive game against a perennial state champion. But what Anselmo witnessed from those seniors had a lasting impression on his career, and is the most important lesson he now passes on to the younger guys on this team.

Nature Coast Manager Brandon DeRespiris took over this year after Frank Vitale retired, and he credits his players, and especially his senior leaders, for guiding this team back to this grand stage. As he reflected on the season now complete, he remarked on how easy his leaders made his job. 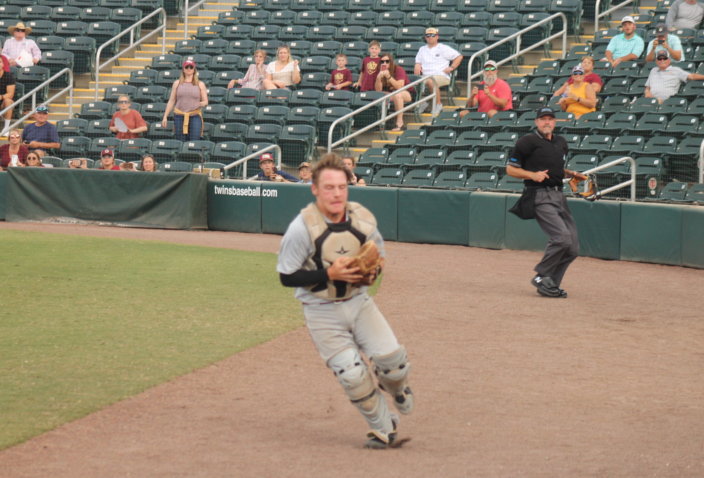 Colts catcher Nate Fennwald tracks down the final out on a pop foul.

“I told them after the game that I would go to war for them every single day,” DeRespiris said. “We battled all year, and to get to this point we had to come back in four of five games. Credit to their leadership as seniors. From day one in the fall and them getting to know my coaching style and me getting to know them, if I turned my back for one second I had no doubt that these guys would continue to do what we needed to do every single day. It was a tough ball game today, and Campbell pitched phenomenal. We tried to make adjustments late, but we just didn’t make them quick enough. That’s baseball.”

From the very beginning, the team had this stage in their sights. But between hope and reality was all the hard work that got them here.

“In the beginning of the year I remember saying that we were going to states no matter what,” Zeth Rodriguez said. “We made it, battled as a team and nobody had their heads down even though we were losing.”

Neither team in the game had ever won at this level, which meant one was destined for history on Monday, while the other club would be left to hope for another chance at that coveted state crown again next season. That fact alone served as a stark reminder of just how difficult it is to reach the state Final Four.

“Just to have this experience two times in our four years, that was great for us,” Montanez said. “This is definitely an experience of a lifetime, and we knew that as freshmen.” 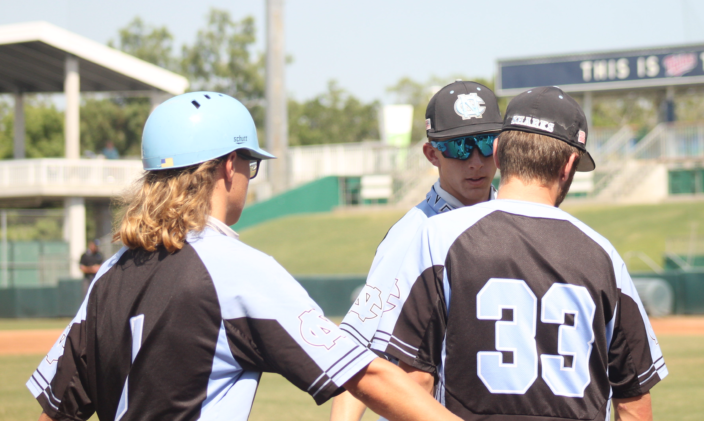