Newberry Advances To The 1A State Championship 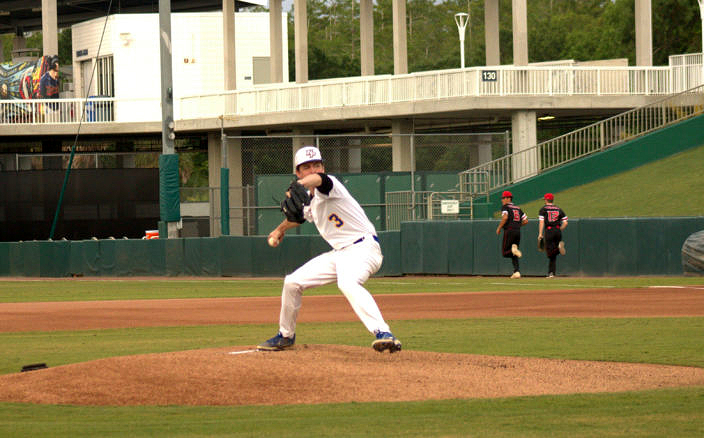 Luke Ridley had 11 strikeouts in 6.1 innings to earn the victory.

The Newberry Panthers have handled every obstacle they have faced all season long. With just one loss on the year, the Panthers were not sneaking up on anyone in the playoffs. But after taking all of their best from the Hamilton County Trojans in Wednesday’s Class 1A state semifinal, the Panthers kept doing what they do by holding on for a 3-2 victory at Hammond Stadium in Fort Myers.

Newberry (24-1) advances to Thursday night’s state championship, where it will take on the Chipley Tigers in the 1A grand finale, also at Hammond Stadium. The Tigers (26-1) advanced following an 11-1 win over the Holmes County Blue Devils in Wednesday’s other semifinal.

“It’s awesome,” Panthers Manager Mike Spina said. “We’ve known we’ve had a special group of boys all year long. They just needed to come together, play as a team, and as you can see in a 3-2 ball game, the team played well. I saw these guys picking each other up, and it was nice to see. We fought all year long, playing in some close ball games. We know how to play in close ball games.”

Newberry rode senior ace starter Luke Ridley for his swan song performance, in his final high school start. The right-hander received just enough run support to back his performance on the bump, where he piled up 11 strikeouts in six-and-a-third innings to earn the victory.

“This is a phenomenal feeling, but it is the last time that I’m going to touch a high school mound, so I am kind of dreading that. But the win feels amazing,” Ridley said. “This is what we dreamed about all year, and what we talked about. That was the whole goal there was this year is to win the state championship, and that is all that is in front of us. I feel like we will come out strong and do what we have done all year.” 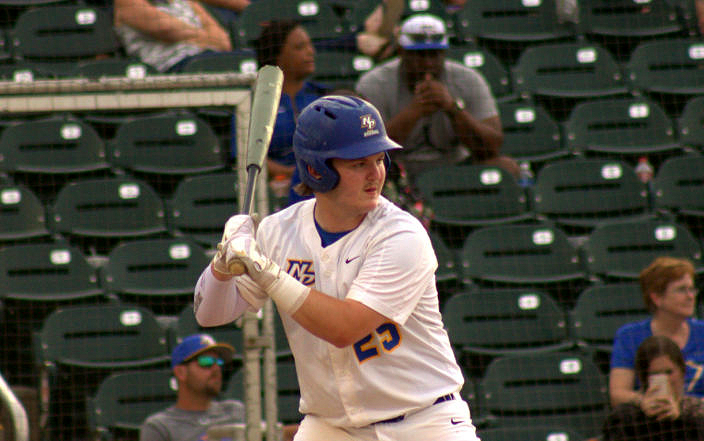 Kaleb Compton was 1-for-3 with an RBI single for the Panthers.

After three scoreless innings, Newberry got going midway through. Jayden Holcomb led off the bottom of the fourth with a base hit on a flare to shallow right field to turn the lineup back over. Justen Crews walked and Caden Massey dropped down a perfect bunt that tugged the third base line but stayed fair to load the bases. Makai Johnson then lifted a high flare into shallow center field for an RBI single and a 1-0 Newberry lead.

Hamilton County (18-9) didn’t waste any more time in making a pitching change to junior Brent Howard, who allowed two more runners to cross the plate but also managed his way out of the inning. Logan Carlisle supplied a deep flyout to left-center field for a sac-fly RBI, and Kaleb Compton followed with a fielder’s choice RBI on a slow roller to third.

“These guys have played at a high level since they were nine years old,” Spina said. “They have all been pushed. So we knew that we weren’t going to get scared when things get tight. We’re going to buckle down and try to do what we have to do for the team to be successful. They are mentally tough, they have been through a lot this year and they have come a long ways.”

Lucas Keustle reached on catcher’s interference to reload the bases, but Howard got a swinging strikeout to end the threat.

An inning later the Panthers threatened again, but were turned back. Crews reached second base on a throwing error, stole third and then watched as the bags filled behind him when both Massey and Johnson walked. Howard responded with a swinging strikeout and flyout to left field to hold the rope. 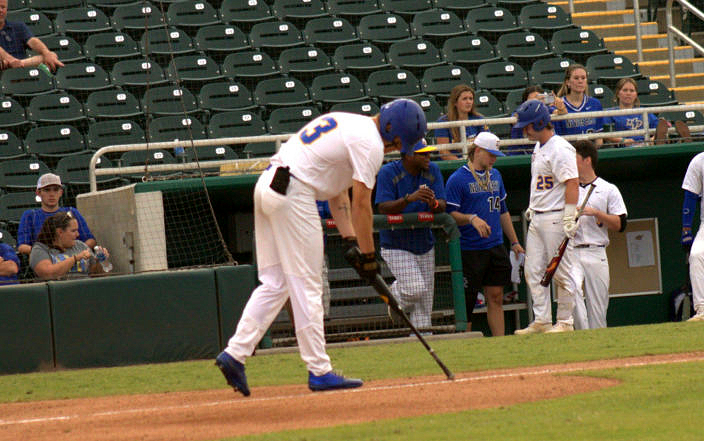 Newberry’s Justen Crews, prior to his first at bat on a 2-for-3 day at the plate.

The Trojans rallied to get on the scoreboard in the fifth. Jerel Tolle walked, stole second and advanced to third when David Gause reached on an error. Gause initiated a double-steal attempt, and Tolle came home when the throw found the grass in center field. Gause boldly swiped third to keep the pressure on, and Julian Garcia delivered with Hamilton County’s first hit of the night on a blast deep over the left fielder that fell for an RBI double that pulled his team within a run.

“They thought they were just going to come and get an easy dub, but we came with a fire at the end,” senior Tmoriyon Paul said. “We are human just like they are human, and we had to just keep playing the game. We just lost it at the end.”

Ridley hit the leadoff batter to start the sixth, but then responded by picking him off at first base. He then struck out the next two batters to end the inning, before the pitch count forced his exit after he struck out the first batter in the seventh.

“Coming out to the mound there is no pressure,” Ridley said. “I’ve got a lot of confidence in myself, and I’ve been a fireballer since I was a baby. I give a lot of credit to my dad, coaching me in the back yard and stuff like that.” 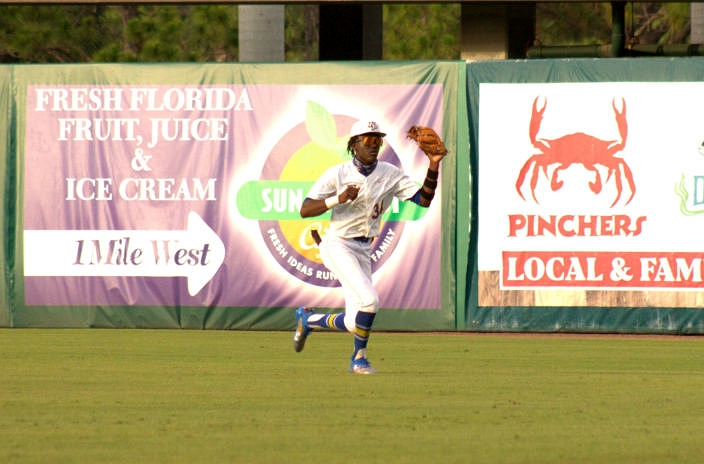 The Trojans managed base runners in the last inning, but were unable to push across the last crucial score. Roger was hit by a pitch and Jaxon Smith connected for a single to right field to put runners on the corners. But reliever Mason Tomchak got a swinging strikeout that ended the contest.

Now the team is in pursuit of its first state title ever, something that has been a long time coming. Newberry last reached the state final 42 years ago in 1979, when it finished as the state runner up. Now the Panthers have a chance to reward all those who have donned the uniform in season’s past in pursuit of the same goal.

“I saw one of my seniors from last year sitting in the stands, and it hurt those guys last year, because we had a really good team last year,” Spina said. “We’ve had a really good team for about the last four years, and for those seniors last year that I had, to not be able to finish the season really hurt. Tonight, and this whole, we were playing for those seniors. We’re going to try and finish strong tomorrow, and hopefully make those seniors proud and make Newberry proud too.”

Ridley transferred to the team this season, along with fellow senior Logan Carlisle. Although he is newer to the team, it was a perfectly seamless fit that worked to perfection.

“Me and this group of guys have been together since we were ten, and it is just a huge family,” Ridley said. “So coming over to Newberry was just like coming home, and Coach Mike has given me all the confidence in the world to play my game and be the best that I can be. He pushes all of us every single day to go out there and work hard, and in the end we all came together. I just love this team.”