‘Cinderella’ Central Bears Down Fivay For 5A-7 Championship 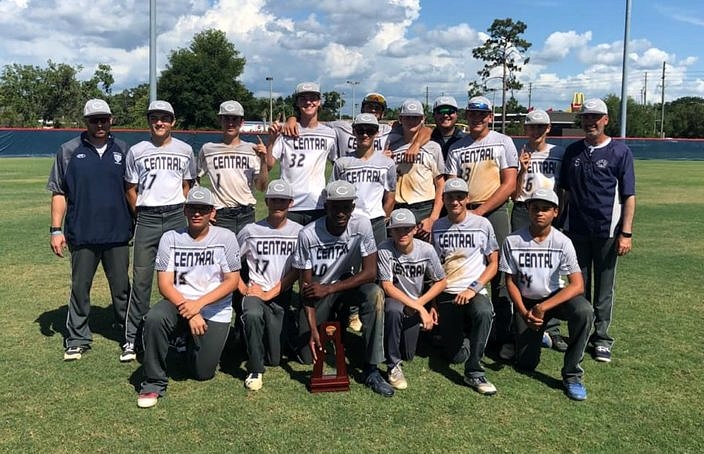 The 2019 5A District 7 champion Central Bears. *Photo courtesy of @chsbears.

Central Bears baseball fans will not soon forget the unprecedented and historical run that the team made this week on the way to winning the 5A District 7 championship. The Bears entered the district tournament as a sixth seed and had to win three upset road victories in order to claim their first district crown since 2015. Central (6-21) came into the playoffs on a seven-game losing streak, and then erupted for wins over Nature Coast and Cypress Creek to find the team in Saturday’s title game. The Bears struck early and never let up to claim the 7-1 victory over the Fivay Falcons to earn the 5A-7 title.

Central will now host the Atlantic Sharks on Wednesday night in the opening round of the regional playoffs. Fivay also advances to regional play, going on the road to take on the 5A-8 champion Bishop Moore Hornets.

Sophomore Justin Gay earned the win on Saturday, picking up his first career victory. The right-hander allowed one earned run on seven hits, striking out five without issuing any walks.

Four runs in the top of the first inning set the tone and provided all the run support needed. Rashaad Boyce connected for the first of three hits on the night and Gay quickly drove him in with an RBI single. Ryan Ebberup followed with a single, Locke Weissman advanced the runners with a sacrifice bunt and Deven Ayala walked to load the bases. Jimmy Russell then delivered the biggest hit of the day when he crushed a shot to left field to clear the bases, the start of a big day in which Russell went 3-for-4 with two doubles.

The Falcons (8-15) avoided the shutout by responding right away with a run in the bottom of the first inning. Eric Scott led off with a single and then stole second, to then score thanks to an RBI single from Michael Finn. Fivay scattered six hits the rest of the way but could not push any more runs across the plate.